One of the most egregious and flagrant diversions, according to a report by Malaysian entrepreneur Boustead, involved a French middleman company named Alizes Marine, which was a subsidiary of parts supplier Ameris France.

Ameris had in turn been recommended for the job by France’s main defense contractor DCNS, which was commissioned to design the boats in 2011.

However, in reality, the documents to be provided under this secret section of the Boustead contract did not concern the boats in question but submarines supposed to have been completed under another previous contract also involving DCNS.

The conclusion could be that the 50 million euros that have been invested in this round of supplies were aimed at filling a hole in the previous Scorpene submarine contract, which has already been revealed to be riddled with bribes. However, in a typically corrupt twist, much of the money that went to Alizes Marine also disappeared!

What Rafizi alleged, based on the facts set out in the Boustead report, was that money was diverted from the Alizes Marine contract using offshore subsidiaries that had the exact same name but were owned by different shareholders. This, as corruption trackers now know, was a well-known Malaysian trick in public contracting under the Najib administration.

Alizes Marine France was owned by Ameris France and run (perhaps interestingly) by its CEO Viktoria Barrier, a Slovak national who happens to be the wife of Ameris France President Thierry Barrier.

Alizes Malta and Alizes Labuan (with accounts in Singapore) were on the other hand controlled by a lady called Zainab Mohd Salleh and someone who lived next to her in Kuala Lumpur.

This lady was identified by the listeners as having been the wife of Abdul Latiff Ahmad, Malaysian deputy minister of defense from 2008 to 2013 and now a minister in the cabinet of Prime Minister Ismail Sabri Yaakob.

Invoices issued by Viktoria Thierry in France, according to the flow charts drawn up by the auditors, would have been instructed to be paid to the offshore subsidiaries, which would have resulted in the disappearance of almost all of the 3 million euros abroad in that account the auditors believed when they produced their report in 2018, belonged entirely to someone else – someone linked to a politician overseeing the deal, Abdul Latiff.

Incidentally, Boustead’s project manager, Ahmad Ramli Mohd Nor, was himself recently arrested for allegedly receiving bribes of around RM21 million.

Meanwhile, Thierry Barrier of Ameris has confirmed much of Rafizi’s information indicating that he online intelligence that the offshore companies of Alize Marine are impostors and have nothing to do with Ameris France:

“This is clearly a case of the usurpation of our company names and identities, of embezzlement, in which the companies of the Ameris group, Ameris France and Alizés Marine France have no involvement”. [Ameris statement]

Given such devastating corroboration by a senior French executive of Boustead’s own auditors’ claim that the contract was plundered through bogus Alizes offshore companies, one might have assumed that the MACC, the forces Malaysian police and all instruments of public order have reportedly been urged by ministers to embark on an immediate investigation into Alizes Labuan/Alizes Malta and her mysterious Malaysian owners.

Instead, there has been silence on that front. Instead of explaining who the contractor his department was dealing with overseas was, Abdul Latif posted a police report claiming to have been defamed by Rafizi. Similarly, a ministerial ally, Mohd Puad Zarkashi, demanded that Rafizi produce a marriage certificate (stealing it if necessary) for prove the Alliance!

Yet if law enforcement were to do their job and question both this Malaysian minister and the French chairman of Ameris, the two men are in a position to provide vital information about the identity of the shareholder of Ameris. Alizes Labuan/Malta, Binti Zainab Mohd Salleh, est.

Indeed, Boustead’s auditors showed that these TWO men were later involved as directors and shareholders in another company called Mega P Asia Sdn Bhd along with Zainab herself.

The Malaysian Companies Registry tells an interesting story about this arrangement as Ameris Chairman Thierry Barrier and Defense Minister Abdul Latif jointly established the company in 2015 as directors and distributed the actions between them and Zainab as follows: Barrier action 1; Abdul Latif 105,001 shares; Zainab 145,000 shares.

Barrier stepped down as a director and shareholder in 2017, handing over his stake to Abdul Latif. The former Minister of Defense kept his share and his right of director until March 2020, when he resigned from his post of director and sold all his shares to Zainab who now owns 350,002 shares. 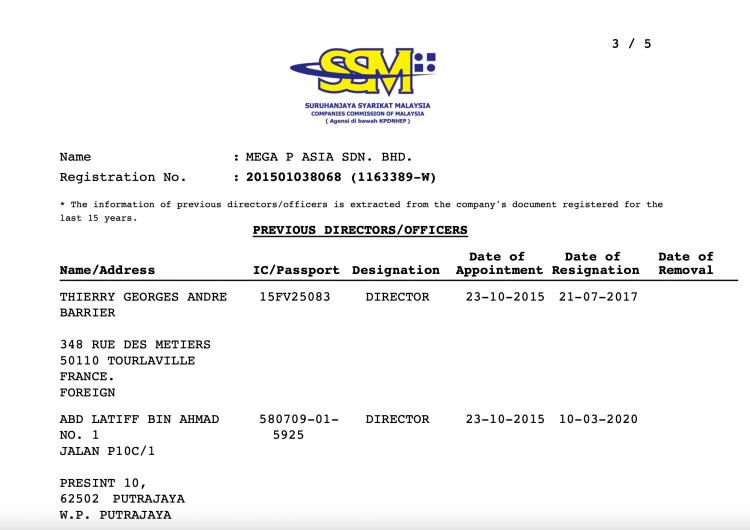 Thierry Barrier acknowledged that Mega P Asia was a Malaysian subsidiary of another Ameris France subsidiary called Mega P which received other parts of Boustead’s LCS contract. When he was questioned, he said online intelligence that Malaysian society was created”only to ensure contractual consistency“.

So who was the ubiquitous Zainab in all these dealings and why was the then ex-Minister of Defense (Abdul Latif left Defense in 2013) a major shareholder with her in a company linked to a former French contractor he had supervised who was receiving more LCS contracts through Mega P Asia?

Abdul Latif can hardly have forgotten these matters as he was a co-shareholder of Zainab and still a director of the company until a few years ago when he resigned and handed over his shares to her. Was it part of a settlement? 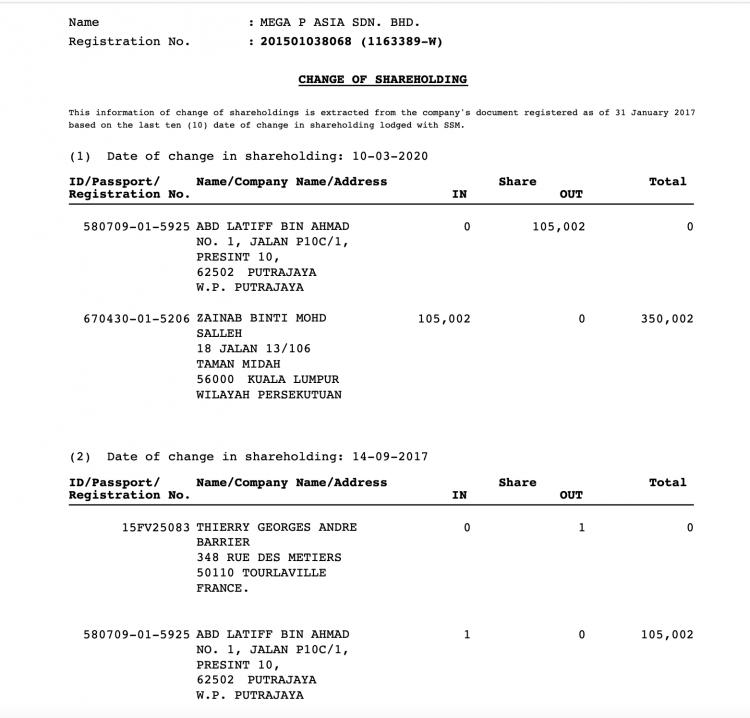 Shareholders together – The chairman of Ameris, the former deputy defense minister and the woman he is suing Rafizi for calling his wife – a woman who also controlled fake offshore companies Alizes Marine Malta and Labuan.

Why should we expect Rafizi to explain this matter and not Abdul Latif?

Another extremely revealing detail noted by the auditors is that Zainab was the first to launch with the Alizes Marine business network, having set up its Malta branch and its Labuan branch in early 2011 several months BEFORE mother Society “. Alizes Marine France was created as a subsidiary of Ameris France run by Thierry Barrier’s own wife.

Is it going too far to ask people to believe that the president of Ameris France knew nothing about these fake subsidiaries before naming his own subsidiaries after them?

Or that Alizes France, run by his own wife, raised bills with demands for payments to go through these off-shore companies rather than directly to Paris, where they never arrived – according to information in the tables of streams produced by Boustead listeners?

Perhaps there are explanations that can be provided by this Ameris hierarchy that will surely help Malaysia identify what was going on with the mysterious Zainab. The same goes for Abdul Latif.

However, instead of chasing after this missing money, it appears that Bukit Aman acted to arrest Rafizi, interrogate him and seize his mobile phone, based on Abdul Latif’s complaint that Zainab was misidentified.

Huge sums of Malaysian public money disappeared (again) from this contract. And Abdul Latif knows who Zainab is. Why are the Malaysian police interviewing the wrong person and (again) harassing the whistleblower in this case rather than looking for the perpetrators?