CNN anchor and reporter Jim Sciutto went off the air this week on “personal leave” after a network investigation linked to a serious fall he suffered earlier this year in Amsterdam, according to reports.

Sciutto was back in the United States after covering the war in Ukraine and was injured during a stopover in the Dutch town, according to The Daily Beast. Sciutto had since recovered, and CNN ordered Sciutto to address a “personal situation,” according to the report.

CNN has since given him leave, The Daily Mail reports Wednesday. So he didn’t appear on the Tuesday or Wednesday editions of CNN Newsroom, the 9 a.m. ET show he presents alongside Poppy Harlow. CNN did not respond to a request for comment, according to the Daily Mail report.


Sciutto has traveled to Ukraine three times for CNN since the start of the Russian conflict and subsequent invasion to report on the war. According to The Daily Mail, the most recent trip was in April.

The Daily Beast noted that network personnel usually return from Ukraine to Poland. So we didn’t know why Sciutto was in Amsterdam. Details of his fall or injuries were also uncertain.

The developments come as CNN aims to revamp much of its news gathering and production under new chairman Chris Licht. The initiative saw the network make new hires and raise the frames to new roles while ditching on-air talent including former “Reliable Sources” host Brian Stelter, who was fired in August. 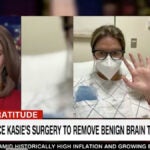